“Then I don’t suppose you would be interested in seeing my fourteenth-century copy of Aurora Consurgens. It’s French, regrettably.”

Matthew lures Diana to France by promising her a first crack at a rare manuscript. 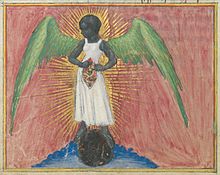 We’ll talk more about the Aurora Consurgens later, but it’s worth an introduction now. The Aurora Consurgens is in fact a well-known alchemical treatise of the 15th century.  Though it was once attributed to Thomas Aquinas, it’s now thought to be the work of an author called Pseudo-Aquinas. We’ll return to the manuscript in a few chapters, when Diana begins work on its imagery and poetry. In the meantime, you might be interested in the Easter egg buried in Chapter 18 – the discussion of the female enlumineresse, or illuminator, Bourgot le Noir. Sure enough, Bourgot le Noir was the daughter of the illuminator Jean le Noir, who lived in the 14th century. The Metropolitan Museum of Art has a series of essays relevant to her work linked here. You can see examples of the le Noir family’s work here.

In the center of rolling hills was a flattened peak dominated by a crenellated hunk of buff and rose stone. Seven smaller towers surrounded it, and a turreted gatehouse stood guard in front. This was not a pretty, fairy-tale castle made for moonlit balls.

In the Real-Time Reading Companion, Deb notes that Sept-Tours is based on Chateau Dauphin, a castle in the Puy-de-Dôme département of France. It was initially built in the twelfth century and augmented through the fifteenth. The family who owns the chateau renovated it in the eighteenth century. There are some lovely interior photographs of the chateau on Chateaux Medievaux. 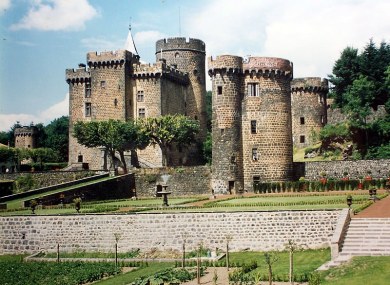 Should you find yourself in France, Chateau Dauphin is open to the public. Deb posted a lovely drone video of the chateau in her Real-Time Reading post for 6 October.

Matthew launched into a volley of something unintelligible that sounded like a cross between French, Spanish, and Latin.

I presume that Matthew gives Ysabeau what-for in Occitan, the language of the troubadours . The Occitan region of France is comprised of Limousine, Languedoc, and the old Aquitaine, the southern portion of the French Alps.  Occitanie is just south of the Auvergne.

Linguistically, it’s related to Latin, French, and Spanish and it’s similar to Catalan, which is spoken in Barcelona.  If you’d like to hear Occitan spoken by natives, here are a few video links:

This chapter has tons of little bits and bobs that we could talk about, but I’ll just cover one more before we move on.

“Giordano Bruno. ‘If the thirsty stag runs to the brook, it’s only because he isn’t aware of the cruel bow,” I continued.

Giordano Bruno was an Italian philosopher, astronomer, mathematician, and occultist. He believed that the Earth orbited the sun (right on, Danny-boy) and that the universe was infinite. He died at the stake after refusing to give up his unorthodox ideas. Astronomers named an impact crater on the moon and several asteroids after him. Some question whether we ought to credit Bruno rather than Copernicus for theorizing that planets orbit the sun. Cosmos took that take, and Discover Magazine took issue. Apparently, Bruno was something of a jackass. The New Yorker wrote a bit more extensively about him at the time of the publication of a biography, Giordano Bruno: Philosopher/Heretic by Ingrid Rowland.
Tomorrow, we’ll ride. The Daemons discuss Chapter 17 in Take 17! If you’re hungry for more, you should check out the Tenth Knot, or shoot us an e-mail at chamomileandclovecast@gmail.com.