Silently I read the accompanying text, translating the Latin into English: “Turn to me with all your heart. Do not refuse me because I am dark and shadowed. The fire of the sun has altered me. The seas have encompassed me. The earth has been corrupted because of my work. Night fell over the earth when I sank into the miry deep, and my substance was hidden.”

As previously discussed, the Aurora Consurgens is a 15th c. alchemical treatise. In the late 20th century, the Jungian scholar Marie-Louise von Franz presented a translation in which she added commentary on analytical psychology to the text.

Analytical psychology seeks to bring together the conscious and unconscious parts of the mind and asks patients to unify the deeper, darker elements of the mind with the persona they present to the outside world. Jung had theories about alchemy as a representation of the process of psychoanalysis and individuation. As for the text and meaning of the Aurora Consurgens, the internet had remarkably little to offer. If you’d like to read someone else’s thoughts on the manuscript and how it relates to the AST, Daemons did a long post on the significance of the Aurora Consurgens a while back.

When the Sabbath was over, Mary Magdalene, Mary the mother of James, and Salome bought spices so that they might go to anoint Jesus’ body.  Very early on the first day of the week, just after sunrise, they were on their way to the tomb  and they asked each other, “Who will roll the stone away from the entrance of the tomb?”

But when they looked up, they saw that the stone, which was very large, had been rolled away. As they entered the tomb, they saw a young man dressed in a white robe sitting on the right side, and they were alarmed.

“Don’t be alarmed,” he said. “You are looking for Jesus the Nazarene, who was crucified. He has risen! He is not here. See the place where they laid him.  But go, tell his disciples and Peter, ‘He is going ahead of you into Galilee. There you will see him, just as he told you.’”

Trembling and bewildered, the women went out and fled from the tomb. They said nothing to anyone, because they were afraid.

Give ear to my prayer, O God; and hide not thyself from my supplication.

Attend unto me, and hear me: I mourn in my complaint, and make a noise;

Because of the voice of the enemy, because of the oppression of the wicked: for they cast iniquity upon me, and in wrath they hate me.

My heart is sore pained within me: and the terrors of death are fallen upon me.

Fearfulness and trembling are come upon me, and horror hath overwhelmed me.

And I said, Oh that I had wings like a dove! for then would I fly away, and be at rest.

Lo, then would I wander far off, and remain in the wilderness. Selah.

I would hasten my escape from the windy storm and tempest.

Destroy, O Lord, and divide their tongues: for I have seen violence and strife in the city.

Day and night they go about it upon the walls thereof: mischief also and sorrow are in the midst of it.

Wickedness is in the midst thereof: deceit and guile depart not from her streets.

For it was not an enemy that reproached me; then I could have borne it: neither was it he that hated me that did magnify himself against me; then I would have hid myself from him:

But it was thou, a man mine equal, my guide, and mine acquaintance.

We took sweet counsel together, and walked unto the house of God in company.

Let death seize upon them, and let them go down quick into hell: for wickedness is in their dwellings, and among them.

As for me, I will call upon God; and the Lord shall save me.

Evening, and morning, and at noon, will I pray, and cry aloud: and he shall hear my voice.

He hath delivered my soul in peace from the battle that was against me: for there were many with me.

God shall hear, and afflict them, even he that abideth of old. Selah. Because they have no changes, therefore they fear not God.

He hath put forth his hands against such as be at peace with him: he hath broken his covenant.

The words of his mouth were smoother than butter, but war was in his heart: his words were softer than oil, yet were they drawn swords.

Cast thy burden upon the Lord, and he shall sustain thee: he shall never suffer the righteous to be moved.

But thou, O God, shalt bring them down into the pit of destruction: bloody and deceitful men shall not live out half their days; but I will trust in thee.

For I lift up my hand to heaven, and say, I live for ever.

Moments later a silver banner rose over the top of the building in the village and a bell began to toll. Men and women slowly came out of houses, bars, shops, and offices, their faces turned towards Sept-Tours, where the ancient symbol of eternity and rebirth snapped in the wind.

The word “ouroboros” means “tail devourer” in Greek and refers to the symbol of the snake, serpent, or dragon eating its own tail. It represents creation, destruction, rebirth, and renewal. In alchemy, the ouroboros represents the fusion of opposites and the transcendance of duality.  It’s a symbol that speaks 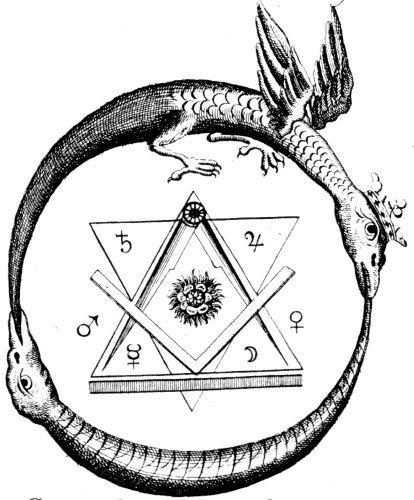 powerfully to vampires, but also to Matthew and Diana. If you’re so inclined, the internet would be happy to sell you a vast quantity of ouroboros-themed jewelry.

Nothing but the color red appeared at first. Then the red took on a texture, strands of red burnished here and there with gold and silver. The texture became a thing–hair, Sarah’s hair. My fingers caught the strap of a backpack from my shoulder, and I dropped my lunch box on the lfoor o fthe family room with the same officious clatter as my father when he dropped his briefcase by the door.

In Chapter 22, as Matthew threatens to leave and give up on Diana, she begins to have visions. It’s pretty clear to me that the visions have a theme–loss. Specifically, the loss of love and family. I don’t know whether vision symbolism is related to dream symbolism, but I thought it’d be fun to play with the things that Diana sees as she goes in and out of her visions. All of these snippets come from Dreammoods.com and Dreambible.com.

Armor: To see armor indicates insecurity. You are worried about your well being.

Bow and Arrow: A combination of male and female energies, anger, aggression, tension,

Now that he’d left, I was terribly aware of his absence. As I sat on the roof of the watchtower, my tears softened my determination to fight for him. Soon there was water everywhere. I was sitting in a puddle of it, and the level just kept rising.

It wasn’t raining, despite the cloudy skies.

The water was coming out of me.

Despite my research, it would appear that the concepts of witchfire, witchwind, and witchwater are all products of Deb’s imagination. I cannot find any reference to myths about those three powers, but I’d be curious if someone else did.

As Ysabeau soothes Diana, she begins to tell him the story of how Matthew was made. She mentions that Matthew was born around the time of Clovis, the Merovingian king who ruled over the area spanning from Belgium and Northwest France to Gaul. Upon his death, Clovis’s kingdom was divided amongst his four sons. Clovis is remembered for his conversion to Christianity.

I cannot find any reference to a fever or plague taking hold in the Auvergne in 536, but disease was common enough that I’m sure it doesn’t take much of a stretch to think of something that would have carried away Blanca and Lucas. Curious about medieval diseases? Ordinarily, I’m not — but the idea of the King’s Evil and Water Elf Disease was too juicy to pass up. Medieval people died of many, many different diseases–influenza, leprosy, the plague, diphtheria, measles–most due to a combination of poor sanitation and poor nutrition. I do not recommend Googling symptoms, as the photos are horrid.

“Manjasang?” I tried to roll the syllables around my mouth as Ysabeau had.

Manjasang is a real Occitan word, though I haven’t turned up many references outside of the AST. If you have any, I’m all ears.

We’ll be back tomorrow with Chapter 24. As always, you can reach us at chamomileandclovecast@gmail.com and at chamomilenclove on Twitter.