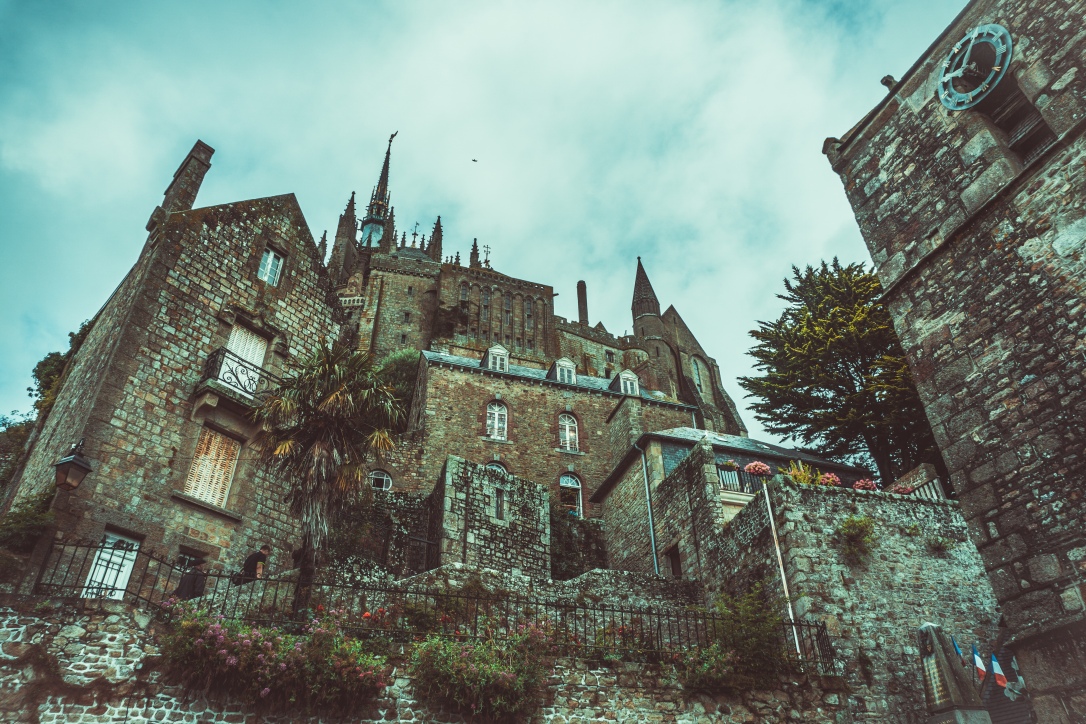 “We have arrived at Mont Saint-Michel, madame.” Pierre held out his hand.

The UNESCO World Heritage site of Mont Saint-Michel (St. Michael’s Mount) is an island in Normandy famous for its dramatic architecture and powerful tides. The picturesque island and abbey is “a technical and artistic tour de force, having had to adapt to the problems posed by this unique natural site.” According to fiveminutehistory.com, the design for Mont Saint-Michel came to Bishop Aubert of Avranches in a dream in 708 A.D. In the dream, the Archangel Michael told the Bishop to build his abbey on the island at the mouth of the Couesnon River.

Reportedly, the Bishop ignored him… and the archangel burned a hole in his head to encourage his compliance. The skull of Bishop Aubert allegedly bears a burn mark from this encounter; you can view the skull on display at the Saint-Gervais d’Avranches basilica. According to TripAdvisor reviews, the hole in the skull is “cool,” however it got there in the first place. The abbey at Mont Saint-Michel was an important pilgrimage site in the Middle Ages despite the fact that it houses no major relics and did not witness any particularly significant events in the history of Christianity.

Should you care to visit, you can take a day trip from Paris. Like these guys:

A gentle cough directed my attention to a man standing before one of the blazes. He was dressed in the red robes of a cardinal and appeared to be in his late twenties — a terribly young age for someone to have risen so high in the Catholic Church’s hierarchy.

Well, Diana — that may be true for anyone except François de Joyeuse, noted churchman and politician. Cardinal Joyeuse came from an “intensely religious” family of bishops and soldiers; he became Archbishop of Narbonne in 1581 (aged 19) and cardinal in 1583 (aged 21). The Joyeuse family was deeply involved in the French wars of religion; François’s brothers all died in support of the Catholic cause. As might be gathered from Cardinal Joyeuse’s (rather terse) exchange with Matthew, the Joyeuse family was very loyal to Henri III of France — Henri III originally supported religious tolerance in France but repealed his more tolerant edicts in 1585 to privilege the Catholic French. Interestingly enough, Henri III was also a potential suitor for one Elizabeth I of England. This… fell through. Referring to a putative spouse as a “public whore” is not exactly best practice, after all.

“What is this place?” I asked after the footmen led us to a deserted château. It was surprising warm for an empty residence, and the delicious smell of cooked food floated through the echoing corridors..

“The house of an old friend … This was René’s favorite hunting lodge.”

Because Deb overlooks no tiny detail, it shouldn’t surprise you that René, Count of Anjou (René I of Naples) (1409-1480), was a real-live person. He inherited the ruins of the castle at Baugé in 1422. His mother, Yolande of Aragon, burned the original structure to the ground to prevent it from falling to the English during the Hundred Years’ War. After René’s death, the chateau fell into disrepair. The French government embarked on an extensive renovation project in 1961, when the chateau became a cultural landmark. 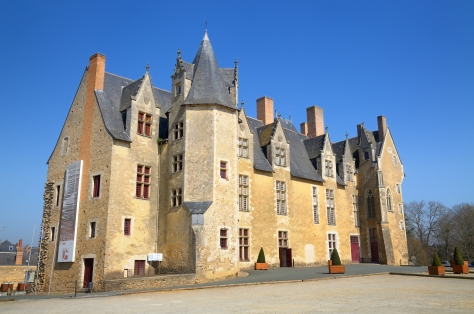 You can still tour the chateau if you happen to be in Anjou, or you could live vicariously through Trip Advisor.

Two days later, as twilight fell, Matthew, Pierre, and I stopped on one of these ragged mountaintops, the de Clermont family chateau barely visible through swirling gusts of snow. The straight lines of the central keep were familiar, but otherwise I might not have recognized the place. Its encircling walls were intact, as were all six of the round towers, each capped by conical copper roofs that had aged to a soft bottle green. Smoke came from chimneys suggesting that some crazed giant with pinking shears had trimmed every wall. There was a snow-covered garden within the enclosure as well as rectangular beds beyond.

Diana describes a living, breathing Sept-Tours very different from the quiet keep Ysabeau occupies in 21st century France. The description of Philippe’s 16th century household aligns nicely with the seigneurial economic system of the period. Seigneurial economics eventually gave way to the market economy but they dominated parts of Western Europe until industrialization. Seigneurialism vested the power in a lord of the manor on whose land peasants settled and worked the fields. They paid for land in labor, goods, and coin. The part of the house Diana describes sounds like the demesne (di-mayne), or the portion of feudal land retained for the use of the lord and his family. Within the walls of the feudal manor, you’d expect to find the lord’s ovens, his grist mills, his stables, his blacksmith, etc. — everything necessary to provide basic goods and services for those living on the land year-round.

You can learn more about medieval manor houses via Wikipedia, or you could always decide to get a closer look and buy this one.

Matthew started at the sound. Alain cast a worried look at him and pushed the door. It silently swung open on substantial, well-oiled hinges.

In the world of the All Souls Trilogy, Philippe is notorious for speaking Greek and Latin — and he prefers that you do, too. If you’ve ever wondered (1) how ancient Greek differs from its modern counterpart or (2) how we know what Latina actually sounded like, I have you covered with these videos:

By the time his father acknowledged our presence, my anxiety and temper were both dangerously close to the surface. I was staring down at my hands and wondering if they were strong enough to strangle him when two ferociously cold spots bloomed on my bowed head. Lifting my chin, I found myself gazing into the tawny eyes of a Greek god.

I haven’t yet come to a conclusion about The World of All Souls and how it figures into our usual death-of-the-author approach. I suspect that Jen and I would lean towards “nice to know, but not textual” — any details we learn from TWOAS are fascinating, but they don’t actually add to the interpretation of the text other than to tell us where Deb was going when she wrote the original trilogy. Unless you can trace the fun little nuggets of information to the original text, we probably won’t use them for interpretation.

I can already hear you saying, “That’s no fun,” but meh. That’s how we choose to do our interpretive work. The good news is that I can still mine TWOAS for details regarding the Real-Time Reading as much as I like.

Which brings me to Philippe’s given name — mentioned on page 168 of SON. Alcides Leontothymos. Alcides is the given name of Herakles/Hercules, the greatest of the Greek mythic heroes who completed the Twelve Labors. “Alcides” means “from the line of Alcaeus” and “Leontothymos” means “lion-hearted.” In a very fun twist, the epithet “leontothymos” is applied to Herakles/Hercules in a poem translated by none other than George Chapman. The poem goes something like this:

I WILL sing of Heracles, the son of Zeus and much the mightiest of men on earth. Alcmena bare him in Thebes, the city of lovely dances, when the dark-clouded Son of Cronos had lain with her. Once he used to wander over unmeasured tracts of land and sea at the bidding of King Eurystheus, and himself did many deeds of violence and endured many; but now he lives happily in the glorious home of snowy Olympus, and has neat-ankled Hebe for his wife.

Hail, lord, son of Zeus! Give me success and prosperity.

This idiom — meant to express that ill deeds have repercussions likely to rebound — isn’t French. It’s thought to come from Chaucer, who remarked in The Parsons Tale (1390) that curses are like “birds that return to their own nest.” The chickens come from a far later iteration of the same expression — most likely dating to about 1810. The idea is premodern — the phrasing, not so much… which suggests that Philippe might be a fileuse de temps, himself (I kid).

“Immortal Memory” by Lisa Gerard and Patrick Cassidy. This is, and always will be as far as I’m concerned, “Philippe’s Song.”

The logistics of travel to Sept-Tours mean that this chapter has to last us until 26 November, when we begin our true stay at the chateau.

In the meantime, you can find us on our Facebook group, the C&C Clovers, you can follow us on Twitter @chamomilenclove, or you can e-mail us at chamomileandclovecast@gmail.com.

We can’t wait to hear from you.