In the Real-Time Reading Companion, Deb reveals that the soundtrack for Chapter 41 is Emmylou Harris’s “The Pearl.”

The lyrics are as follows:

We are aging soldiers in an ancient war
Seeking out some half remembered shore
We drink our fill and still we thirst for more
Asking if there’s no heaven what is this hunger for?

I can’t actually seems to track down the “On This Day” post for 30 October, but I’d be deeply in your debt if you could pass it on.

“My mother used to wear it all the time,” Matthew said, picking it up between his thumb and index finger. “She called it her scribble ring because she could write on glass with the point of the diamond.”

In Deb’s post for Chapter 42, she talks about how she doesn’t like to make things up and prefers instead to draw from real-life objects when writing about her characters. She relates that she gets tons of reader questions about Ysabeau’s “scribble” ring. If you’re so inclined, you can buy a copy here.

The ring depicted in the post is a gimmal/gimmel ring from the collection of the Victoria and Albert Museum in London. They are so called because the Latin word for twin is gemellus.

The rings became popular in the 16th and 17th centuries and were often used as betrothal rings: wear one part of the ring at engagement, another after your ceremony. There are several fine specimens of ancient gimme rings in the Zucker collection in Baltimore. Many of the rings have traditional motifs, like hearts and hands, as symbols of love and fidelity.

Another scent–spicy and sweet–joined with the lavender, and I saw a tree laden with heavy, golden fruit.

Quince is a relative of both the apple and the pear and bears some similarity to both. It’s a hardy tree, flourishing in many climates despite its origins in Afghanistan and Iran. In ancient times, it was associated with the goddess Aphrodite. They’re difficult to eat raw–hard and very tart–but I happen to love them. 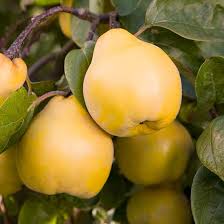 Curious about quince? Here’s a few things to get you started using them:

Quince: The Tough Fall Fruit With a Secret Reward

She hunters makes; and of that substance hounds

Whose mouths deafe heaven, and furrow earth with wounds,

To hounds rude pursuits should be given in chase.

The verse really does exist – it comes from George Chapman’s “Shadow of Night.” The poem – published in 1594 – is Chapman’s earliest significant work of verse.

It treats the “theme of inspired melancholy,” a state of “deep and searching thought.”

For us, of course, it summons visions of Diana, the Goddess, and   Matthew’s chess set.

With Matthew and Diana safely in the 16th century, our 2017 Real-Time Reading of A Discovery of Witches comes to a close. The Daemons cover Chapters 39-43 in Take 24!; they’ll start their chapter discussions for Shadow of Night very, very soon.

Thank you for joining me for this incredible journey; it’s been great fun and I can’t wait to see what you all have to say about the chapters as we approach them again during our discussions.

If you have comments, questions, concerns, etc., please feel free to get in touch via @chamomilenclove on Twitter or by e-mail at chamomileandclovecast@gmail.com. We couldn’t ask for a better, kinder, smarter, more enthusiastic audience; you make this little podcaster’s heart sing.

Happy Halloween, happy Samhain, and thank you for playing along with this year’s real-time reading.