“Prana mudra,” Matthew explained. “It encourages the life force and is good for healing.”

Prana mudra is a yoga technique thought to increase vitality and activate the muladhara or root chakra. Yogapedia recommends the posture as a therapeutic mudra and suggests that one practice it in lotus pose. A mudra “controls the flow of energy in the body” and “[unblocks] chakras.”  Ideally, the use of prana mudra reduces fatigue and nervousness and enhances focus and clarity. You can find the steps to perform prana mudra here, or watch the following video:

“You can make a lot of money water witching, you know,” Sarah called as we approached. “Everyone in town needs a well, and old Harry was buried with his dowsing rod when he died last spring.”

Water dowsing is the practice of using a rod or stick to locate underground water sources. Wikipedia suggests that dowsing as a practice emerged in Germany in the 15th century; Martin Luther apparently wrote that dowsing violated the first commandment. In some places, dowsing is called “doodle bugging,” a charming phrase for which I have no clever commentary. Sadly, darlings, dowsing doesn’t have any basis in science.  Truth being no defense for fiction, however, Diana can dowse away quite happily in the pages of ADOW with little effect on the outside world.

“It is a wedding. The chemical marriage between mercury and sulfur. It’s a crucial step in making the philosopher’s stone.”

The Chemical Wedding, or the joining of mercury (water and earth/female) and sulfur (fire and air/male), is the coniunctio step of the alchemical process. Alchemists believed in the purifying power of a union of opposites: dark and light, life and death, gold and silver. It features prominently in the Rosarium Philosophorum, an alchemical work of the 16th century. The University of Glasgow wrote a lovely article on the Rosarium that’s available here. There’s also an article on the Holy Wedding and Jungian psychology, which relies heavily on alchemical themes, here.

The hieros gamos, or holy marriage, is a ritual mating between gods that appears in many cultures–from Wiccans to Greeks to Hindu mythology–and represents the union of the male and female aspects of the divine. In some cultures, it’s purely mythological, however, in others, there are rituals devoted to the actual union of the gods.

“What’s a caulbearer?” I whispered.

“Someone born with the amniotic sac still intact around them. It’s a sign of luck,” Sarah explained.

Wikipedia states that “caulbearers” represent 1 in every 80,000 human births. Caulbearing is harmless and infants born with a caul have it removed immediately upon delivery. “Some Early Modern European traditions linked caul birth to the ability to defend fertility and the harvest against evil.”

“The results do belong to Diana,” Marcus said. “She’s a chimera, Matthew.”

Chimerism is real, and may occur for a number of reasons. There’s the stated reason for Diana’s chimerism–absorption of a fetal twin–but there are other examples, such as people who have received marrow transplants and therefore have blood cells from another individual, or mothers who take on some of the cells of their offspring. This TIME story tells how one man’s unborn twin was the genetic father of his child.

“Why are you so resistant?” Miriam asked impatiently. “Cross-species breeding is the next evolutionary step.”

The scientific literature–revealed to me by the Great and Powerful Google–suggests that Miriam is onto something:

Why do animals interbreed?

“Marcus is fond of the Pre-Raphaelites, and Miriam knows a lot of mythology. They picked the name,” Matthew said by way of explanation.

Lilith appears in several ancient sources, including biblical texts and the Epic of Gilgamesh. The name “Lilith” comes from the Sumerian “lilitu,” which means wind spirit or female demon. 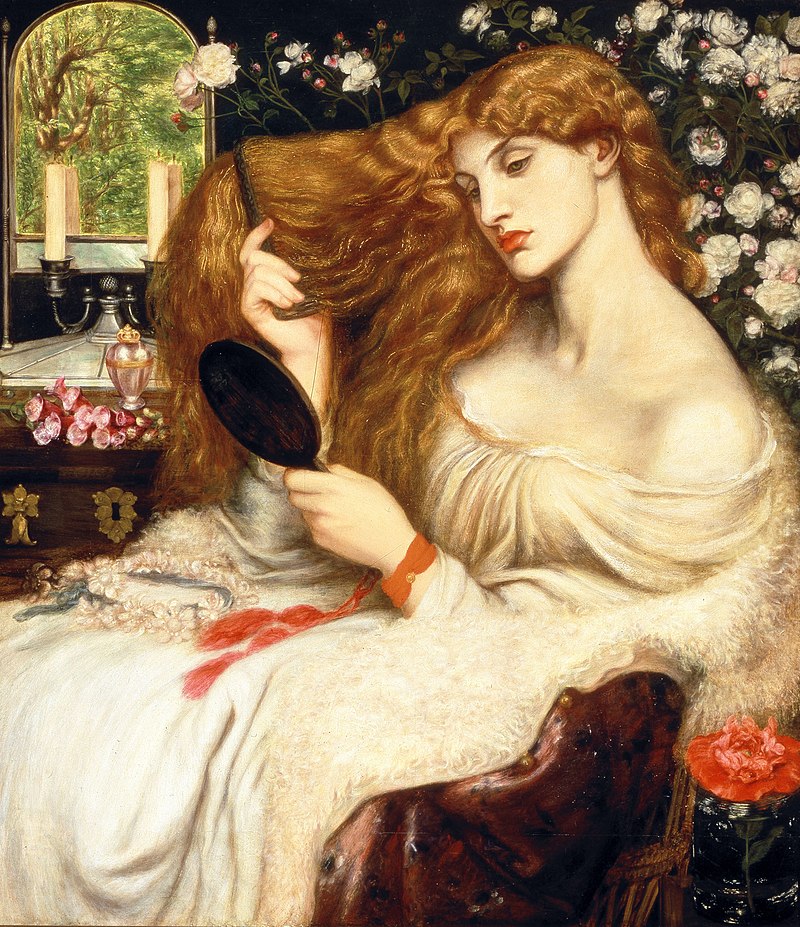 In the Bible, Lilith was created before Eve and wanted to be equal to Adam. The 13th century writings of Isaac ben Jacob ha-Cohen suggest that “Lilith left Adam after she refused to become subservient to him and then would not return to the Garden of Eden.” The painting to which Marcus refers is the “Lady Lilith,” by Dante Gabriel Rossetti.

He used his mistress as the model for Lilith, naturally. The Met has a nice blurb on the painting here, and some thoughtful commentary on the painting can be found on www.victorianweb.org.

BOOM. That’s why Matthew won’t answer to that name, and why Philippe gave it to him. That’s absolutely heartbreaking.

Honestly, the rest of the chapter speaks for itself. Tomorrow, sadly, we meet Juliette in the woods and spend a few days in and out of consciousness. Be kind to one another and rest up.

You know where to find us. Be good.